....for our Saudi World Cup Soccer team in Germany. I know it's the next-door country, but I feel just like that little Dutch Boy, sticking his finger into the dyke (you in the corner, why are you sniggering?) and every time one leak gets plugged another one sprouts up like a Gorgon's Head because I'm going frantic here and mixing my metaphors dreadfully....

First we had the "Skin Issue", expanses of skin in and around their hotel. The hotel got rid of those, thankfully. Then we had the "Rind and Crackling issue", with the hotel kitchen awash in bacon grease. I don't know what the hotel are doing about that, but as some commenters very wisely suggested, there are a number of Kosher Hotels in Germany, and I think the team would be well advised to stay at one of them instead.

But now we have yet another "Skin Issue" (Thanks to "Christer" and "Gerald" and "Thomas" and "Alessander" for bringing this to my attention, and once more "Uwe" for his help with translations). 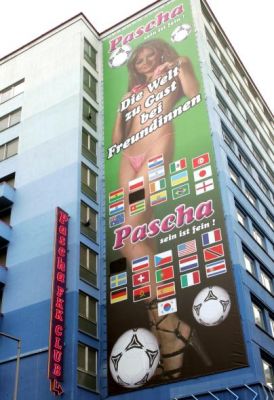 Here, as you see, is the problem. It is a wall. On the wall is a picture of a young lady. The young lady has a great deal of skin. The young lady is displaying most of that skin, and appears to be lifting her bikini top. Because this wall is in Cologne, you may be forgiven for thinking that this may be an advertisement for Cologne. Perhaps the young lady has sprayed some Cologne on her bikini top, and is now sniffing it? Sadly the truth is much less fragrant. The wall belongs to a building. Inside the building are many such young ladies, all with a great deal of skin, but, I fear, with as little covering. The young ladies work in what is known as the "Personal Services Sector" of the German "Hospitality Industry". This being Germany, the services on offer are subject to close government supervision and health inspection. The building is in fact the largest of its kind in Germany, the Pascha in Cologne.

The slogan on the wall is a play on the words of the official World Cup slogan. Being a slogan, it doesn't transfer too well into English, and the official German slogan

translates literally as The World as Guest with Friends. That's rather clumsy, so on their English website they go for A time to make friends. Either way, you get the gist.

Meanwhile, on the wall, they've changed Freunden to Freundinnen, which now reads A time to make girlfriends - which, if you think about it, is quite appropriate for such a building, although it does imply relationships lasting longer than 20 minutes.

If we avert our eyes from the young lady's exposed chest for a moment, and look further down, we can see something very interesting. Not the fact that she is about to take a left-footed penalty kick without a run-up in a very dangerous pair of high heels. (I do hope she removes those when offering "Personal Services"; in some circumstances she could cause a very nasty eye injury.) No, I was referring to the set of national flags. 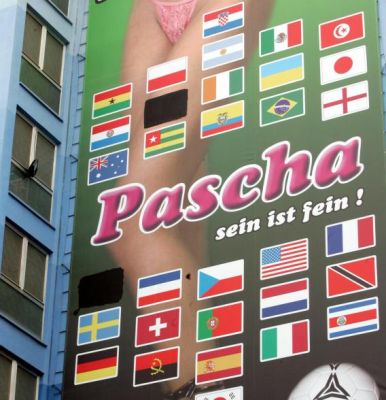 In fact, they are the flags of the competing nations in the 2006 World Cup. With two exceptions, which football devotees will readily spot. But let's allow Germany's "Der Spiegel" to take up the story.

It must have seemed like a good idea at the time. Europe's largest brothel, the Pascha in Cologne, which incidentally claims to be the world's only brothel with a money-back guarantee for dissatisfied customers, (presumably the ones who get their eyes poked out?), attached the flags of all 32 nations competing in the World Cup to its façade in a bid to demonstrate international flair and attract custom during the tournament this summer.

However, as well as attracting custom, this attracted the attention of some concerned local citizens, who felt it their duty to warn the establishment of the insensitivity of having certain flags on display....

Men from the Muslim community came to the door complaining that showing the flags of Saudi Arabia and Iran was an insult to the Prophet Muhammad.

It's the writing, you see. The Saudi flag says "There is no God but Allah and Muhammad is his Prophet" which is deemed, in that location, to be offensive to Muhammad. Now whether Muhammad, having been dead fourteen hundred years, is terribly interested in, let alone offended by, his name being on a flag on top of a brothel in Cologne, Germany, is an interesting theological question. I would have thought it more important to worry about what God thinks, because His name is there as well, but some of our brothers seem to care more for Muhammad than for God, which strikes me as Idolatry, but what do I know? As for humans, one doubts if anyone could actually read that writing on a flag fluttering in the wind all the way up there on the top of a twelve-storey building. And it's in Arabic, of course. And most men who pass this way have eyes missing anyway.

But no matter. Our Muslim citizens came, passed on their advice, and went. Then they came again, as perhaps many try to do in this building, when the 20-minute timer is inexorably ticking away. But no, they felt that another gentle word was in order, some peaceful, caring Muslim advice....

Later, some returned in masks. "On Friday evening we were threatened by 11 masked men who demand that we take down the Saudi Arabian flag," Lobscheid told the Kölner Express, a local newspaper. Not wanting any trouble, the brothel obliged and removed it and the Iranian one. But that still left the flags printed on the poster.

That's right, there's still the poster on the wall. So even more warm and loving Muslim advice is on its way. Yes, they are going to come a third time.

"On Saturday night there were 20 masked men armed with knives and sticks. They threatened to get violent and even bomb the place unless we black out the Iranian and Saudia Arabian flags on the poster as well," said Lobscheid. The men had left before the police arrived. But to spare his establishment any more trouble, Lobscheid ordered a crane to black out the two flags as well.

Excellent. Isn't it nice to reach reasonable agreement with reasonable people, rather than let things get confrontational? It's the Muslim Way.

It's also good for our team. If they drove past there in the team coach, and saw their national flag fluttering alonside all the other World Cup flags, they might be tempted to stop, under the impression that it was part of the stadium. By the time they discovered their mistake, it could be too late. Fifteen minutes to go before the kick-off with Spain, and there they are, not warming up on the pitch, but instead lolling around by the touch line, dreamy smiles on their faces, smoking cigarettes....

But they could teach the young lady how to take a proper penalty....