....two of my favorite interests. But enough about me, there are far more important concerns. Remember this item about the Saudi soccer team? How the off-the-field preparation for the World Cup involved dealing with the "Skin Issue"?

"We do have a photo exhibition in the pool area which shows a lot of skin and it goes without saying that it will be removed by then," Michel Prokop, the hotel's general manager, told Reuters."

There are also five art nouveau paintings hanging in a theatre in the park that belongs to the hotel. The paintings by Wilhelm Kleukens feature naked boys wearing wings - and will come down.

....but let's not dwell on that. Because, although General Manager Michel Prokop is reported to have lived in Egypt for two years and therefore should know better, there are other issues still unresolved, issues that could seduce our team down the slippery path of darkness and perdition. I'm not just talking about them losing 7 - 0 to Spain, I'm talking about them losing their immortal souls.

I am extremely grateful to "Uwe" for pointing this out to me, and helping me with translations. For we are talking not about the "Skin Issue", but the "Rind Issue", even the "Crackling Issue" 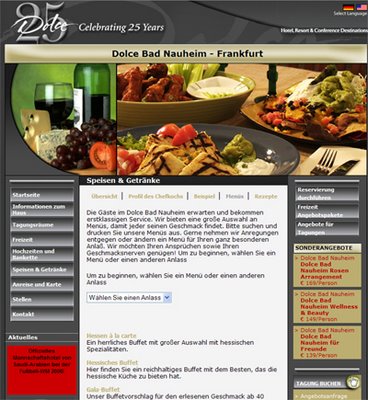 Let's take a look at the menus on the hotel web site, with some of Uwe's translations.

....not to mention Grilled Pork Knuckle, Grilled Spare ribs, and many similar dishes.

Folks, this isn't a Hotel, it's a veritable Temple of the Pig! A Monument to Pork Products! They should call it "Der Palast des Schweins"! It's about as Haram as you can get without actually going into the pigsty and giving one of the fellows a wet sloppy kiss all over the snout!

And of course, that's not to mention all the wine-based sauces. And, as Uwe points out, harmless-sounding desserts with names like Berliners which are donuts, deep-fried in lard from who knows what?

Now of course, the team could always bring in their own cooks, to prepare their own menus. But that still doesn't solve the problem, because they'd have to use the same kitchen, which must be literally awash with piggy byproducts, the whole place must be contaminated, there'll be condensed pig fat in the flues, and in the crevices in the ovens, it doesn't bear thinking about.

I think we should cancel the reservations at that hotel, and instead book a Boy Scout camp where they can live in tents and cook food in the uncontaminated open air. I know it won't be as comfortable, but they are not there to be comfortable, nor to look at little naked boys with wings, nor to smell the sizzle of the sausage, they are there to win the World Cup for Saudi Arabia, and no sacrifice is too great.

Problem 1. It's all based on the Jewish idea, as described in their Book, about the blood of an animal containing its life, therefore we can't eat blood, nor animals that eat other animals and their blood, nor animals like the poor old pig where you can't slit their huge muscular throats easily and so get them to expel their blood quickly and cleanly. I understand that, although it gets so enormously complicated, only a University Imam Graduate understands the fine points

Blood on meat does fall under the category of filth. However, it is excused filth (ma‘fuww ‘anhu), meaning that one can cook the meat and eat it without having to wash off the blood. If one adds water to the meat for cooking purposes, and the water changes because of contacting the blood on the meat, this water may likewise be consumed.

There is a caveat, though: if one pours water on the meat with the intention of washing off the blood, the blood is no longer excused (because it has come into contact with a foreign substance) and one must wash it off completely until all its traces are gone. Slight traces that are hard to remove remain excused.

But if we think that all this is a good idea, and it's a Jewish idea, indeed something they practice even now, why are we supposed to hate and despise the Jooos?

Problem 2. God made everything for a purpose. So, if we can't eat it, what is the purpose of the Pig?

You can't ride it.

It doesn't bark and keep burglars away.

It's too heavy to put on your lap and cuddle.

You can't shave it and cover yourself in its fur.

You could try sending a bunch of them round a track, but what would they chase, and who (apart from the British with their love of day-long games) would be interested in a race that lasted for three hours and ended up being won by something called "Fat Boy" or "Bacon Butty"* or "Rushing Rasher"?

So what is the point of the pig, if not to eat? Could the Christians possibly have stumbled on some divine truth, after all?

However it is not for me to ponder, and we are told they are forbidden and serve no purpose on God's earth. But as they are so cute, perhaps we are really supposed to kiss them after all? 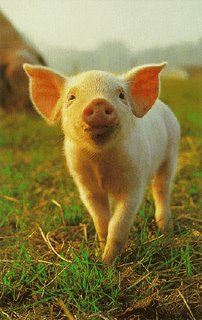 * An English delicacy, strips of bacon in a white bread roll, ideally covered with HP Sauce*