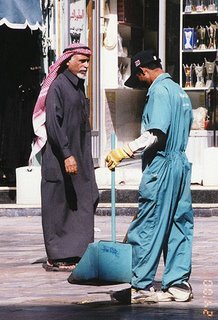 When God created Saudi Arabia, he also presented us with three gifts:

- The Holy Mosques at Makkah and Madinah, for our spiritual needs

- The Oilfields, for our material needs

- The Indian Subcontinent, so that we had people to sweep out the former and pump out the latter.

Perhaps as a result of this, we have developed certain fixed ideas about what we will and will not do for a career. Generally, we want to work in:

- the Armed Forces, Police, or Security services. However, you need to be in "the right tribes" to get these jobs.

- University or School. (teachers are very revered in Islam)

- Other professions, or as "Managers". But not salesmen, that's for the pushy Lebanese.

(As an aside, my own profession fits somewhere in the above. But if you think I am being smug and superior, I will point out that while at College I made extra money as a Tyre Mechanic. I actually became quite nifty with the tyre lever (both manual and pneumatic), valve key and "spider". Something that has stood me in good stead on two occasions when getting a flat tyre on a desert road. With a hot and grumpy family being being broiled in temperatures of 130 plus, it is a time for rapid personal action rather than trying to call someone out via a dodgy cellphone connection in the middle of prayer time.)

Anyway, the corollary of these jobs that we will do, is those jobs that we won't do. Usually involving touching things other than guns, airplane joysticks, books, pens or computers.

Now for a long time we have had this program of Saudization, involving taking over certain jobs from the expatriates, so that we become less dependent on foreign labor as the oil gradually runs out. The trouble is, decades of foreign labor means that we associate certain jobs with our darker-skinned brethren, and no self-respecting Saudi is going to do one of those jobs, ever. Like the picture above, the Saudi walks proud, the Indian keeps his eyes on the ground 'cos that's what he's sweeping. And only one of them would like to swap roles.

But Saudization is not catching on, and we're having to backtrack.

Labor Minister Ghazi Al-Gosaibi announced yesterday that his ministry was reducing the Saudization rates for certain categories of jobs from 30 to 10 percent after noticing that Saudis rarely apply for such jobs.

So the Labor Ministry has finally "noticed that" Saudis do not like to touch flour, cloth, metal, wood....

But, as always, there is an exception....

However, the minister insisted that administrative, financial and receptionist jobs at the above workplaces must be filled by Saudis.

Of course! We'll let them do the nice clean jobs! And can you imagine a male Saudi Receptionist? Or a male Saudi Secretary? I don't need to imagine them, I've actually met them, every company has them, but don't get me going on that subject!

So what are we to do with our fastidious and unemployed youth? This is where nice liberal Alhamedi becomes horrible arch-conservative Alhamedi. Because while I believe in democracy and human rights and all that, I don't believe in social security payments to lazy youth who spend all day in bed or watching TV or drinking coffee rather than go out and get some job, any job, that will earn some money for them and for the economy. And I'm surprised that the most pious country in the world can allow at least 25% of its males to live the life of pimps, their "b*tches" being those oil pumps that work tirelessly for them, night and day. So I would cease any payments to them, and their families, until they were starved into going out and get that job. But then, they'd probably rather die of hunger than pick up that Indian's broom.

But the Labor Ministry disagrees. Instead, we import more foreign labor and reduce those quotas. Then we'll whine because the foreigners have the temerity to send their earnings back home and spoil our balance of payments.

So what we do instead is to create more nice government jobs. And where better than in the Passport Department? Because you need a passport to leave the country, and enter it, and an exit / re-entry visa, then a work visa if you're a foreign worker, then visas for your relatives to come and visit, and a visa to nip across to Bahrain, and a visa for Hajj............We can create visas to celebrate every occasion, and they all need clerks to process them. But no Indians need apply. Even the ones with degrees.

So what happened when we created 500 new clerical government vacancies? 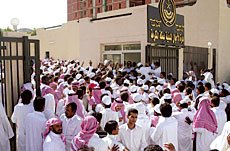 An unexpectedly huge crowd of applicants turned up in Riyadh on Wednesday when 500 job vacancies were announced....The applicants, who came from across the Kingdom, had begun to converge in front of the department and in nearby streets since Tuesday morning. Many of them had been sleeping on the sidewalks or in their cars....the youths with no apparent reason at all grew impatient and started to shout and heckle, disregarding instructions to queue up quietly before the counters.

Ah, yes, "queues". Sometimes known as "lines". Like Christianity, something that we are aware of, but do not believe in. There is no such word as "queue" in our language. Why should there be? What is there in the desert to queue for - a McDonalds counter or a portable lavatory?

The Four Rules of Saudi Queueing.

1. Queue is a foreign word, for foreigners. Saudis do not need to queue. If you see a line of people, that indicates that there is something desirable at the front, and it is waiting for you, so just go and get it.

2. If the line is from the Indian subcontinent, they will not dare to stop you from going to the front. Indeed they will be grateful, in their quiet and humble way, that you have honored their line with your presence.

3. If the line contains Westerners, they may object to your going to the front. Affect not to understand their unrefined languages. If some smartass has a smattering of Arabic, pull a face that suggests you can't make head or tail of his silly accent. However if there are no other Saudis around, be careful, as some of them can become extremely threatening and physical. The men can be scary as well.

4. If you meet another Saudi at the head of the queue, precedence goes to the better family or tribe. Unless one of you has a relation behind the window or whatever it is you are queueing for. However if a Bedu from out of the desert turns up, let him go first, because everyone expects him to be pig-ignorant and not understand queues and you just can't be assed trying to explain it to him, and anyway he can't read so he's probably come to the wrong place and he'll bugger off soon enough as it is.

However the problem arises when there are 10, 000 Saudis, and no other nationalities, all after the same thing, and having no word to encapsulate the notion of "queue".

They pushed and kicked, knocking several youths unconscious and injuring others. Officials at the counters could not cope with the waves of applicants scrambling to reach the counter at the northern gate of the department. Overwhelmed by the furious youths, the recruitment officials who were trying their best to complete the formalities of registration after receiving the applicants’ files, had to suspend the process.

Finally, the authorities had no choice but to call in police to control the unruly crowd. In the meantime some officials tried to quell the unrest by announcing on loudspeakers that all the files would be processed only if the applicants waited patiently in the lounges until their names were called out....the situation went out of control despite the best-laid plans because the applicants did not abide by the instructions given to them

"Wait" and "patiently" and "abide by" and "instructions". Again, understandably, missing from our language. If the idea is useless or unpleasant, why bother inventing a word for it?

Any other country, I'd feel sorry for these guys. But it's not as if they don't have a wide choice of jobs anyway, jobs that someone in Cairo or Damascus or Amman would jump at if they were available in their own towns. And there are 1.25 million foreign drivers employed by Saudi households, we could 100% Saudiize those tomorrow, and I bet every single one of those guys can drive, even if he can't do anything else; the only obstacle would be their own vanity.

So the ones who don't get those jobs will continue to waste their youth and their lives. And only the Muttawa will take any interest in their moral welfare.

A Hail court handed down on Wednesday a sentence of 500 lashes and six months in jail to a youth on charges of falling prostrate before a dancer in a musical program held in a rest house (a sort of (usually) alcohol free mens' club / pub out in the suburbs) in Hail seven months ago, Al-Watan newspaper reported yesterday.

The punishment will be given in front of two secondary schools and a mosque in the city. The prostration was recorded by a mobile phone camera and posted on a website. Several visitors to the site demanded the punishment for the youth who prostrated before the dancer.