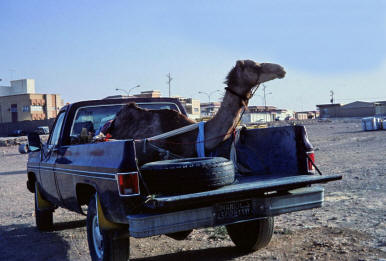 When we were talking about The Work Ethic the other day, I did make the suggestion that we could reduce Saudi unemployment, not to mention Saudi fecklessness, at a stroke by only employing Saudis as drivers for Saudi families. Hey, Presto, 1.25 million instant jobs.

However I am a hopeless idealist, and simple solutions in Saudi Arabia usually end up being simplistic. And everything in Saudi Arabia is a complex jumble of issues. My solution won't work because the drivers are needed to transport our females to their relatives, shops, and (but only extremely rarely) their place of employment. And because we keep our Saudi youth in a state of monastic seclusion, never seeing the merest sliver of female skin, even keeping them out of shopping malls where they might glimpse women from afar, we work them up into a fever pitch of extreme hornyness, without them having anything but the vaguest idea of what to do about it. So putting one of these sexual time-bombs in the same car as our cherished females would be just asking for trouble.

Now some of you out there might be equally seduced by simple solutions, and suggest that we allow our women to drive. We've been thru this before. As Hussein, the forum administrator of Saudi Arabia's "false flag" website targetted at the West, the "aren't we all really reasonable and enlightened" Netmuslims site, explains, with all the smoothness of a skilled apologist....

The rule of women not driving is because Saudi women are supposed to wear full Niqab. If they are in full niqab, they would not be able to see well enough to drive a car.

....which may lead the more impatient of you to suggest abolishing the Niqab as well, and kill two birds with one stone. Indeed. Isn't it tempting just to cut thru all the crap, unravel the whole tangled ball of nonsense, and join the rest of the world? Someone decided to do just that, in style.

A WOMAN driving at a speed of 160km/hr was stopped by road patrol on the Madina-Qasim expressway recently, reported Okaz newspaper. Police were surprised when they found a woman in her 30s behind the wheel, while her younger brother was sleeping comfortably in the back seat.

That is how God meant life to be in Saudi Arabia. The women drive, the men dream. Instead, the Wahhabis have unfairly loaded the burden on the menfolk, and created a land where men do both.

“I was driving to work on a busy morning in Makkah,” Al-Ahmadi said. “That day was special for me because I was about to get a promotion on the job from the company manager. I started drawing a picture in my mind of me standing in front of the company board members receiving an award for my hard work and listening to all their compliments. I was smiling about this mental picture, but the smile soon turned into a look of terror when I slammed into the back of a water truck.

But back to our original story. I do have an arrangement with Mrs A. If, God Forbid, I'm driving and have a heart attack or stroke or other disabling condition, she must take the wheel and get me to medical help as quickly as possible. To hell with the consequences. And these are the consequences....

They were both taken to the police station where they stayed until the woman’s husband came to release them. He was forced to take a pledge that the incident would never repeat itself.

You see, the wife has no legal responsibility in this situation. It's just the same as if your children misbehave, you have to go into the police station and promise that they won't do it again. It's deliberately humiliating, of course. If you have four wives, fair enough perhaps, it's a bit like having a pack of naughty puppies, you can never guarantee that Number 4 is not up to some mischief somewhere where you can't see them. But if you only have the one wife, what humiliation! You "can't control just one woman?". The looks of scorn and pity from the policemen, who probably keep "their women" locked up in the house so they can't go out and commit the sin of driving or anything else.

Anyway, because our wives must wear the Niqab, they are not allowed to drive. Therefore they need a driver. But that can't be a sexually explosive Saudi man. So what we do is to ship drivers in from the Indian subcontinent. All 1.25 million of them. Don't you see that there's a beautiful logic about the whole thing? It's almost as if God designed it himself.

And no sub-continental would dare to have "ideas above his station" when it comes to our women....

....the Asian expatriate was working as a driver for the girl's family before the death of the girl's father....

....he said that he expressed his desire to marry the girl to her father before his death....

....but this Saudi father is not very keen on the idea of daughter marrying a dark-skinned foreigner....

....But the family terminated his services and sent him back to his country....

....so that's the end of that. Daughter had a silly girlish thing for the driver, but it's all forgotten. But Love will always find a way....

....But he returned to the Kingdom. The expatriate escaped with the girl from Makkah to Jeddah and they were married by a fellow countryman. After that he returned with her to Makkah and lived with her in his house in Al-Azizia District. They lived together for three years and she gave birth to a baby boy....

So they all lived happily ever after. Except that, in Saudi Arabia, happiness is frowned upon, especially true happiness with your Asian driver. As is having a dark-skinned baby. We have a legal system for that sort of thing. Daughters are the property of their family until the day they die. So elopement is, of course, a very serious crime....

....for escaping with a Saudi girl and marrying her without her family's knowledge....The Penal Court in Makkah....

I think you know what's coming next....

Yes. Three years in prison, and a thousand lashes. Or 16 months and 99 lashes. Occasionally, women get the better deal. But there could be another reason, as we'll see later.

We all know about prison. Let's talk about lashes for a minute. Because you may get the impression from some Saudi apologists that lashing is more symbolic than punitive. I have heard Western expatriates being told that the person doing the lashing "must have a copy of the Quran under his upper arm at all time, so as to limit the blow. The real punishment is from the humiliation of being stung many times....." 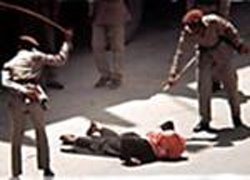 So let's take a close look at this photo. I don't see any Qurans under the armpit. I do, however, see two big guys taking it in turns to lay into that guy's back. A covered back, of course. Less hygenic, but it spares the sensibilities of the gawping crowd. A bit like the blanket that the Picador's horse wears in a Spanish bullfight, so you can't see where it has been gored.

Anyway, let's hear what Amnesty International has to say about our symbolic punishment.

The judicial punishment of flogging, which amounts to torture or cruel, inhuman or degrading treatment or punishment, is regularly imposed.

There appears to be no upper limit on the number of lashes judges can impose. The most lashes in a single case recorded by Amnesty International is 4,000, imposed on Muhammad 'Ali al-Sayyid, an Egyptian convicted of robbery in 1990. The sentence was reportedly carried out at a rate of 50 lashes every two weeks. After each session he was left with bruised and bleeding buttocks, unable to sleep or sit for three or four days afterwards.

"I thought it will be fast but no, it was done one at a time... [The policeman] really takes his time before striking. I started counting and when it reached 40 I thought I could not make it... I prayed so hard... At last it reached 60... I could not explain the pain I experienced."

As I said, symbolic.

Why, when both are party to the same "crime", does the husband get 1000 lashes, and the wife 99? Here's another clue. There has been an update in the case of Miyati, the Indonesian maid, who lost several fingers, toes, and teeth at the hands of her Saudi employer, and was sentenced for "falsely accusing" her employer.

The judge who had previously sentenced an Indonesian maid to 79 lashes for falsely accusing her sponsor and his wife of torturing her has reversed his sentence.....the judge who in December sentenced Nour Miyati, the maid brought to a Riyadh hospital back in March 2005 in a critical condition, has revoked that sentence.

....but upheld the sentence of 35 lashes against the sponsor’s wife for beating Miyati.

So just to recap,

....the employer, who beat up the maid and caused her to lose fingers, toes and teeth, was sentenced to 35 lashes

Just so long as that is clear.

Thankfully the same judge who passed the original sentence, briefly stopped twitching his head, drooling, giggling, and talking to himself, and in a short moment of lucidity has partially undone the grief he has caused. Meanwhile the Saudi defending lawyer, perhaps overcome with relief, or who perhaps genuinely enjoys kissing nether regions, observed....

“This proves the integrity of the Saudi judicial system”


A Saudi who beats up the maid, is sentenced to 35 lashes.

An Indonesian, who gets beaten up, is sentenced to 79 lashes.

A Saudi, the female half of an illegal marriage, is to get 99 lashes.

An Asian, the male half of an illegal marriage, is to get 1,000 lashes.

An Egyptian robber is the lashing record holder, having had 4,000 lashes.