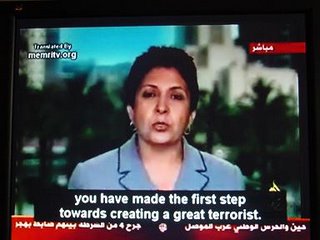 I probably mentioned before that I like "strong women". Mrs A is strong. Mrs A (Senior) is formidable. The so-called "second sex" have an equal share of the planet with the males, and bear an unequal share of its pain. They have every right, therefore, to tell us exactly what they think of us, and what we are doing wrong. We men need it.

For this reason, I especially enjoyed these clips (here, they are numbers #783 and #1050). Islamic terrorism is an almost exclusively male activity, and Wafa Sultan, an Arab-American psychologist, now living in LA, has been tearing into a couple of male Islamist apologists on the subject of terrorism. In the first clip, she is up against a professor of Religious Politics from Algeria. She lets forth with this:

When you recite to a child still in his early years the verse: "They will be killed or crucified, or have their hands and feet on alternate sides cut off," regardless of this verse's interpretation, and regardless of the reasons it was conveyed or its time – you have made the first step towards creating a great terrorist...

In other words, the education system (and Saudi Arabia's is a prime example) that teaches unquestioning acceptance, rather than proper interpretation, of Quranic passages, is the first step in the formation of a terrorist.

The Algerian professor has a bit of a problem with this. Not only is she not covering her head, but she is an extremely forthright, educated, and well-spoken woman, and she's giving him a real verbal lashing. Unable to counter what she is saying, he decides to change the subject. He's basically got three choices:

He decides on option 2. I have edited to relieve the tedium, you'll get the picture.

The guest from America asked how a young man could blow up a bus. If only she had asked how a president could blow up a peaceful nation in Iraq. ....occupied Palestine?.... Hitler, who murdered 50 million innocent people. ....two atom bombs on Japan ......three million innocent Vietnamese? ....the Indians?....the Spanish civil war,....Who has over 15,000 nuclear warheads ....Where was Bush educated?

Thankfully, Wafa comes straight back to the point before we reach Napoleon, Genghis Khan, the Vikings, or of course Joshua.

Murder is terrorism regardless of time or place, but when it is committed as a decree from Allah, this is another matter...

It's not really a discussion, more of a shouting match. But whereas Wafa is continually bang on target, the professor continually blusters and blethers. For someone like me who is heartily sick of Islamist apologists, it was wonderful to watch.

The second clip has her up against a Dr. Ibrahim Al-Khouli. She comes out with a number of home truths, that will be familiar to any reader of this blog.

She then berates the Doctor for being an offensive bigot.

My colleague has said that he never offends other people's beliefs. What civilization on the face of this earth allows him to call other people by names that they did not choose for themselves? Once, he calls them Ahl Al-Dhimma, another time he calls them the "People of the Book," and yet another time he compares them to apes and pigs, or he calls the Christians "those who incur Allah's wrath." .... What gives you the right to call them "those who incur Allah's wrath," or "those who have gone astray," and then come here and say that your religion commands you to refrain from offending the beliefs of others?

Dr Ibrahim can't figure out what's going on here. She's turning his own words back on him, and then some. Why isn't this woman locked up at home? Why doesn't her husband tell her to shut up? Time to change the subject again. He's going for option 3.

Are you a heretic?.... If you are a heretic, there is no point in rebuking you, since you have blasphemed against Islam, the Prophet, and the Koran... 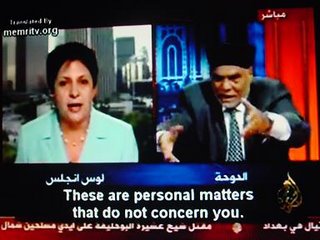 Big mistake, Doc, you're not even in her league. She's not having any of that.

These are personal matters that do not concern you.....Brother, you can believe in stones, as long as you don't throw them at me. You are free to worship whoever you want, but other people's beliefs are not your concern.

Wonderful stuff. I'm sure the reference to "stones" sailed right over his head, because it's a reference to the stone in the Qa'aba in Makkah, as well as the ones that are used to kill adultresses. But he's been insulted by a woman, and he's reaching over to throttle her inside that box that she's speaking from.