The Scene: Ibrahim’s office in the Ministry of Finance. Ibrahim is approaching retirement and looking forward to life on his farm, breeding camels, and harvesting dates. With him is young AbdulAziz, recently returned from college in the USA and “connected”, meaning that his uncle is a Prince; and Saeed, whose Bedu family live in a cluster of black tents off the Dammam road, a bit rough but quite savvy. An Indian cleaner in light brown overalls is invisibly emptying the waste bins and ashtrays.

Ibrahim outlines the problem. He has been tasked with making the Saudi Stock Exchange attractive to Saudis once more. He explains the problem. “It was OK when just a few of us invested. It’s only a small market, and with a small number of investors, prices grew slowly but steadily. Then some Jack-the-lads discovered it, thought it was easy money, and started piling everything they had into it. So the price went up. So they told their friends, “Look how it keeps going up!”, so their friends put all their money into it as well, and sure enough, prices went up even more. So everyone reckoned this was just like oil coming out of the ground, it’s just money for the taking, and when they ran out of their own cash, they took out personal loans from the banks, and invested that, and Lo and Behold!, prices went up even more. And all the papers were writing stories about what a successful economy we had, look how the stock prices are rising, lots of people are getting very wealthy.”

“Then it went belly up”, said Saeed, whose family keep all their savings in saddle-bags.

“That’s right”, replied Ibrahim, “As soon as everyone had invested all they had or could borrow, there were no more buyers, so prices dropped like a stone. And when people saw how prices were dropping, they all started panicking, and selling, and they went down even faster.”

“Apart from a brief rally”, piped up AbdulAziz, and proudly displayed what he had learnt in Business School. “In these situations of a rapidly falling market, there is often a small temporary upturn, due to technical factors and the reversal of long-dated positions. It’s called a “Dead Cat Bounce”, because even a dead cat, when dropped from the top of a tall building, will briefly bounce”. He smirked at the other two.

Saeed grunted. He wasn’t impressed. The only dead cats he ever saw were the feral ones he deliberately ran over in his Landcruiser, and they certainly didn’t bounce.

“Anyway”, continued Ibrahim, “It’s a problem we’ve got to solve. Everyone’s shouting at the government, saying they’ve been ripped off, speculators and ungodly people have been sabotaging our economy, the banks have now got lots of bad loans, the whole finance sector is looking shaky, all the world and his friend are petitioning the King, and he’s telling us to sort it out.
What do you think, AbdulAziz?”

AbdulAziz puffed up his chest. “Well, what we need to do is to put in place a process that will structure a positive-growth scenario by leveraging the synergies inherent in the zero-sum-game investment paradigm going forward, if you will.” He looked eagerly at Ibrahim, like a Labrador puppy hoping to be patted.

Saeed had taken one sandal off, and was picking out bits of dead skin from between his toes. “Darkies”, he grunted.

The other two looked at him.

“It’s quite simple.” he said. “We’ve got lots of Saudis holding shares that are now worth much less than they paid for them. What we need are a load of mugs who will come into the market, buy up those shares, force the price up so that all the Saudis can get their money back, and then the mugs can get left with a load of rubbish when the price drops again.

Westerners won’t do that, they’ve got their own stock markets that frankly work much better, and they are not stupid. So we need to look much closer to home. The people we’ve barred up until now from the market, the expat workers – Indians, Pakkies, Pinoys, Egyptians, Sudanis – Darkies, in other words. If they are stupid enough to come to this country to work, they must be stupid enough to pay silly prices for our shares. Let them invest in the market. But no initial flotations of course, those are very good value, we don't want Darkies buying them, we'll keep them for the Saudis.”

Ibrahim liked that idea. He sensed a public relations coup here. For a start, Saudis were always moaning about these expats, came here to work, but always sending their earnings back home to their own banks and their families, look at the outflow of money from the country, winge, winge, winge. So opening the market to them would help to stem this flow. Secondly, Saudi Arabia was the only country in the World Trade Organization to have restricted trade even more since it joined, so as well as the illegal boycott of Israel, they had now added an illegal boycott of Denmark. But opening the Stock Exchange to all residents would be a move in the opposite direction, a liberalizing move. Even though expats wouldn't be allowed to buy initial flotations, but they could hide that under the table. With no more ado, he picked up the phone and called the Editor of the "Arab News".

Move to Open Stock Market to Expats Gets Positive Response

March 17 2006. The possibility of Saudi Arabia allowing expatriates to invest in the Kingdom’s fledgling stock market was met with an overwhelmingly positive response among both Saudis and expatriates. ....Ahsan Rashid, president of the Alhamrani-Fuchs Petroleum Saudi Arabia, welcomed Custodian of the Two Holy Mosques King Abdullah’s decision. “It is a step in the right direction and will stabilize the Saudi stock market,” he said. “Most important, it will stop the flow of money out of the country. In the absence of investment opportunities here in the Kingdom, a lot of expatriates were putting their money in Western markets. That will be checked for the good of the local economy.” ....This is also in line with Saudi Arabia opening up to international investors after it joined the World Trade Organization,

Ibrahim was very pleased, his boss patted him on the back, but the King of course phoned AbdulAziz to congratulate him on his brilliant idea, what a good investment it was sending him to Business School in the USA, he was a credit to The Family, (for that is the way of things in Saudi Arabia). Meanwhile Saeed went home to count the money that was safe in his saddle-bag, running over the occasional cat on his way, but failing to get any to bounce.

So that is how our Stock Market, long the preserve of Saudi nationals, was opened to expatriates. So how successful was it, getting the stupid expatriates to invest their hard-earned riyals in a falling market but with no opportunity to buy new issues? Did we find lots of mugs to unload our shares onto at silly prices?

As the "Arab News" noted

The turnout of foreign residents at banks to open investment portfolios for Saudi stocks was very low yesterday, the first day that the government opened the market to them.
The news of expatriates’ entry into the market failed to halt the downtrend of the market. The Tadawul All-Share Index (TASI) dropped 626.65 points or 3.94 percent to close at 15,268.46. Over SR5.68 billion worth of shares changed hands yesterday. Only seven stocks were in positive territory while all other stocks were in the red. 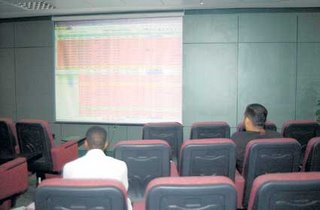 The "Saudi Gazette" noted a similar lack of activity.

LACKLUSTER. One word describes the response of foreign workers to the opening of the stock market to them Saturday.

The photo shows the frenzy of activity in one of the sharedealing rooms that banks provide for their customers. Perhaps these two men think there's a movie about to start. It'll be a few years yet, guys.

One of these days we'll wake up to the truth about our expatriate guest workers. They may be poor, they may be invisible, but they also built the Pyramids and the Taj Mahal.