When the Sizzle is better than the Sausage.

"NahnCee" put me onto this article from the BBC today.

A newspaper in Saudi Arabia has stopped publishing after printing some of the cartoons of the Prophet Muhammad.

That's interesting. It's only been going two months. It's a youth paper.

Shams (Sun) has been suspended as part of an investigation into its decision to publish the cartoons that have caused anger across the Muslim world.

So did they oppose the Saudi government line?

The paper, which is aimed at the country's young people, said it was doing so to mobilise the campaign in Saudi Arabia against Denmark.

No, it supported the boycott of Danish goods. So why didn't the government like it?

Let's take a little diversion. Here's a picture of a demo outside BBC HQ in London, some time ago. What's it about?

As a demonstration, it's pretty puny. White men can't jump, Christians can't riot. No burning buildings, no burning flags, no burning clowns. No wonder they used to get fed to the lions. But that's an aside. When interviewed, they admitted that they'd not seen the thing they were protesting about.

Perhaps if they had, they would have felt let down. My own reaction, when I saw it on TV a few days later, was that it was quite promising - let's face it, Jerry Springer's show makes a huge and soft target - until they brought on the "Jesus" character in the nappy. Because they looked to have done it for effect, like a small child saying RUDE WORDS in front of the grandparents. At that point, the whole thing went a bit flat for me. It wasn't funny, it wasn't satirical, it certainly wasn't blasphemous, it was just plain stupid. Blasphemy, if one wants to go in for that sort of thing, has to have some form of cutting edge. The protestors had no doubt enticed many people with a sizzle, but the sausage didn't live up to it.

Another example. This one's especially for my fundamentalist "fans" who say that I am a "bad Muslim". 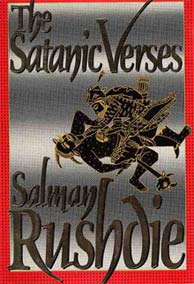 Remember the Fatwa issued from Iran against Salman Rushdie, over his book, "The Satanic Verses"? Still not revoked, incidentally. For those who don't know, these so-called Satanic Verses occur in the Quran, in Surah 53:19 onwards.

Lat and Uzza and Manat were the names given to some of the many "gods" of the idolatrous residents of Makkah. What is remarkable about this passage is that Allah, or God, thru the medium of Mohammad, appears to be talking about these gods as though they were real. Even more remarkable is that there was believed to be an earlier version of this section, in which the next line was....

These are the exalted , whose intercession is hoped for.

....which implies that not only were they real gods, but they could also intercede with "The God", rather like Catholics believe that saints can do.

There is a lot of evidence from early Muslim histories that this line existed in some versions of the Quran. However, as the versions were standardized, it was obviously dropped, because it conflicts with the whole monotheistic basis of Islam. But even without this line, the three preceding ones raise a bit of an issue. It was an issue that Quranic scholars were happy to discuss and debate in the early centuries, when Islam was part of the intellectual life of the Mediterranean., much as in the same way that Jewish and Christian biblical scholars pore over the Bible today. One theory was that it was a political sop to the inhabitants of Makkah, a bit like celebrating Christmas at the time of the previous Winter Solstice celebrations. Another theory was that Satan himself tempted Mohammad to write it (hence "Satanic Verses"), but once he realized that he had been tempted, he revised them to a more orthodox version. However, once Islam closed in on itself, and shut itself off from the mainstream of intellectual progress, this subject was no longer up for discussion; even the existence of several Quran versions began to be denied.

So naturally I was curious to read the book, especially after the sound and smell of the "sizzle" from the Iranian Mullah. And I actually found it to be a very sympathetic description of the torments that Mohammad went thru, an unwilling messenger of God, reviled and ridiculed in his home town. Salman Rushdie puts forward a very plausible account of how Mohammad may have been tempted, and then realized his error. It reminded me of some film versions of the temptation of Christ by the Devil in the wilderness.

As for the rest of the book, I sort of lost interest, it was too surrealistic for me, especially when one of the principle characters starts to turn into a goat. That's just my own taste, or lack of it. But the section that dealt with Mohammad in Makkah was for me the best bit, a very thoughtful and illuminating account, and certainly not blasphemous in any mocking or disrespectful sense of the word. However, for those who seek blasphemy, they will find it wherever they look.

So that's the reaction of one Muslim to "The Satanic Verses". But ask most Muslims about it, and they will tell you it is blasphemous. How do they know? Because the Imam said so. How does he know? Because the Mufti said so. How does he know? Will any Muslim theologian who has actually read "The Satanic Verses" please stand up and explain what is wrong with it?

Which brings us back to our banned journal. It's all about power. If you are a Christian preacher decrying "Jerry Springer - The Opera", the last thing you want is your charges going off and watching it and making up their own minds. If you are an Iranian Mullah, you don't want lots of Muslims getting together in book groups to discuss "The Satanic Verses", because they may start discussing the authenticity of different Quranic texts, which is the last thing you want. And if you are the Saudi government, of course you want your papers to call for a Danish boycott; but do you want them to see the actual cartoons? Do you want them to see that there are actually no cartoons of pigs there, and that a sketch of Mohammad with a bomb in his turban is "as bad as it gets"? Of course not, because you'll start to lose control of the whole issue. Much better for the pliant population to imagine the worst. Don't show them the real thing. Let them hear and smell the sizzle, but don't let them taste the actual sausage, it'll be a complete anti-climax.

Anyway, for "NahnCee" whom I mentioned above, and who also supplied the previous Mohammad emoticons, here is one for her, thanks to "iPod QA Guy"!