From: Royal Press Secretary
To: His Majesty
Date: 1st February 2006

As Your Majesty requested recently, in order to divert public attention from the regrettable demise of a small number of pilgrims in Makkah during the last Hajj, Saudi newspapers were instructed to revive the four-month-old story of cartoons about the Prophet (PBUH) in a Danish newspaper, and turn it into an attack on Denmark, together with a "spontaneous demand by the people" for a boycott of Danish goods.

So far this has worked reasonably well, although major Danish exports are bacon and lager beer, which we do not import, except as "special consignments" for some members of your family. There has also been some unfortunate "collateral damage" in that "Nido" was wrongly identified as a Danish product when it is in fact Swiss; also the boycott has resulted in several thousand Third World expatriates being laid off in the Saudi plants of the Danish dairy company Arla. However we cannot be expected to take the troubles of the entire world upon our shoulders.

What is becoming to a concern to me is the "Denmark fatigue" that is clearly emerging in our newspapers. It has been an enormous strain on them to produce up to four reports a day from a story where nothing is essentially happening. It is also apparent that "reader fatigue" is setting in, and that instead of yet another article on Denmark, they would much prefer to read in great detail all the minutiae of Your Majesty's travels around the world, the full transcripts of your after-dinner speeches, and other matters of great interest and importance.

I have therefore given some thought to "spicing up" the story, and have come to the conclusion that we ought to find some other country, ideally small, harmless and inoffensive and with exports that do not appeal to your family, to demonize in addition to Denmark. I have therefore been reviewing all published representations of the Prophet (PBUH) to establish what countries could be blamed for them. Sadly, there are many representations out there, perhaps more than we ever imagined. 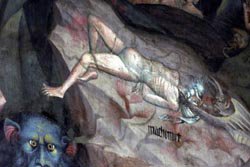 This picture is of an early Renaissance fresco in Bologna's Church of San Petronio, created by Giovanni da Modena and depicting Mohammed being tortured in Hell. Whilst theologically incorrect (it is in fact the Pope who will be tortured in Hell), I would not recommend antagonizing the Italians at this time, simply because of the volume of Italian marble that is imported for use within our royal palaces and public buildings. 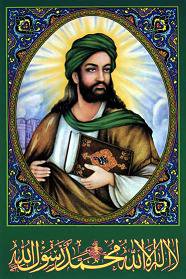 This is present-day imagery that can be bought easily in the souks of Iran, and confirms how doctrinally unsound these Shiite Muslims are. However I would recommend against targetting Iran at present, for the same reason that you in your royal wisdom have chosen not to criticize their building of nuclear weapons; we want to avoid being seen as "Pro-Israeli". 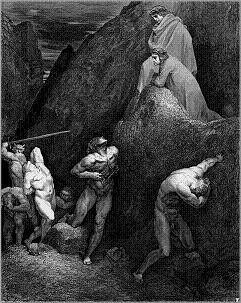 This is a representation of the eviscerated Prophet (PBUH) in the Eighth Circle of Hell as described in the Italian Poet Dante's "Inferno", where he quotes the lines

No barrel, even though it's lost a hoop / or end-piece, ever gapes as one whom I / saw ripped right from his chin to where we fart: / his bowels hung between his legs, one saw / his vitals and the miserable sack / that makes of what we swallow excrement. While I was all intent on watching him, / he looked at me, and with his hands he spread his chest and said: "See how I split myself! / See now how maimed Mohammed is! And he / who walks and weeps before me is Alì, / whose face is opened wide from chin to forlock.

The poet lived in what is now Italy, which I have touched on before. The artist, Gustave Doré, on the other hand, is French. However your Majesty would appreciate the difficulty of boycotting a country where you and several members of your family have summer residences. 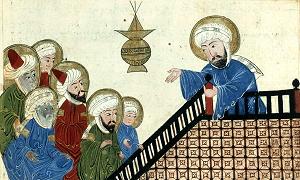 This is by an Islamic artist, from somewhere in Central Asia. However, no-one is going to be interested in some place called Uzz-Wuzzistan, or care if we stop importing Yak milk. 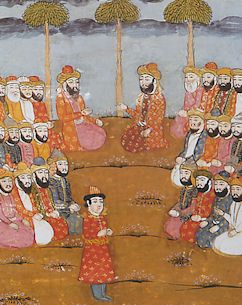 This depiction of Mohammad at Madinah is of Arab origin. However, we can't boycott ourselves, can we? (If his Majesty will permit me this small jest!) 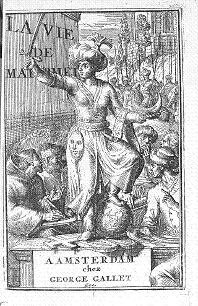 In this picture, Mohammad is shown as trampling on the Cross and Ten Commandments, which, while admirable in itself, is still a Haram likeness. It is set in the Netherlands, which would qualify as a small and harmless country, only exporting flowers to my knowledge. However, thinking ahead, they are in Group C in this year's World Cup, and we are in Group H. If we meet later in the competition, having victimized them over a 300-year-old picture, then we would definitely get a very serious kicking with the rest of the world cheering them on, and a great loss of face for us. Discretion is the better part of valor in this instance. 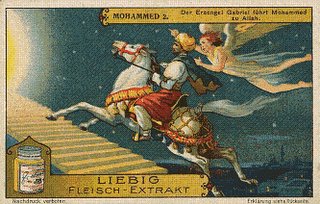 In this image, the Prophet (PBUH) is depicted in an advertisement for bouillon cubes. It is German. However the Germans have a reputation for being very aggressive, and would definitely boot us from one end of the park to the other in the World Cup. Best left alone. 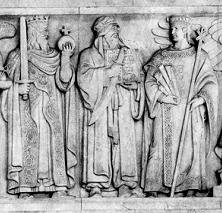 The North Frieze on the Supreme Court building in Washington, DC features a bas-relief sculpture of Mohammed, in between other law-givers Justinian and Charlemagne. If His Majesty will permit me my little jest, we know a few guys in Afghanistan who have experience in removing statues from rock faces! (We may have to wait a few decades, though!). 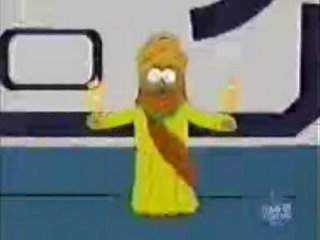 Another image from the USA, this time the sacriligious "South Park" episode called "Super Best Friends". Whilst I do not propose boycotting the USA, His Majesty may wish to be reminded of some of their blasphemies, for such time as and when this decadent country falls, like an over-ripe plum, into our lap.

The final image is the most promising. 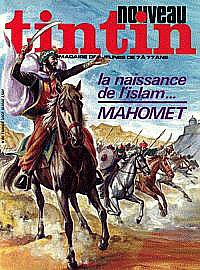 Published a mere 30 years ago, and in itself a very dashing depiction, it is nevertheless a Haram covering for an illustrated story. And the good news is that it was written by Hergé, a Belgian! Belgium is a small, harmless country that only exports, to my knowledge, chocolates and beer, but not Your Majesty's favorites. Also, they are not in the World Cup! I recommend them as the next country to threaten, once the Saudi public tires of Denmark, which will alas be very soon. Victory, as we both appreciate, is all a matter of choosing the right fight.

PS, the Germans have gone on the offensive. I did say they were very aggressive.

PPS I have now learnt that France Soir in France, La Stampa in Italy and El Periodico in Spain have also published these cartoons. Tomorrow no doubt their competitors will do the same thing. I fear that we are going to lose the initiative here, we can't boycott everyone, we could become a laughing stock. Guidance, please. Should I order the Saudi papers to follow standard procedures and ignore all this bad news?

(With thanks to the Mohammad Image Archive)