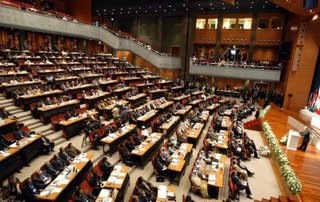 The motorcades screech to a halt, lights flashing; burly bodyguards jump out and usher their charges into the conference hall. They have been summoned here from their palaces, their holiday villas, awakened from their beds, rushed here in their private jets. This is THE big meeting of the OIC, the Organization of the Islamic Conference. So are they finally going to resolve the Darfur conflict, the Brown-Muslim-on-Black-Muslim genocide that has already claimed an estimated 300,000 lives?

Professor Ekmeleddin Ihsanoglu, secretary-general of the Organization of the Islamic Conference, is contacting member states for an emergency meeting of their foreign ministers shortly to discuss major issues including the repercussions of the sacrilegious Danish cartoons.

Silly me, I should have realized. Cartoons are far more important than a "few dead darkies". We already learnt that after the 2006 Makkah Stampede.

So the representatives of such enlightened and progressive governments as Egypt, Saudi Arabia, Yemen, and Malaysia, are going to give advice to the Europeans on what laws they should pass in their own countries.

The OIC member states expect from the EU to identify Islamophobia as a dangerous phenomenon and to observe and combat it like in the cases of xenophobia and anti-Semitism, by creating suitable observance mechanisms and revising its legislation.

So the deal is that the Europe, which already bans incitement to, and practice of, race hatred, should now ban any criticism of others' religions as well. On the other hand, the Islamic countries, who have always criticized the other religions, will still continue to preach race hatred, especially towards the Jooos. Sounds fair enough to me.

Meanwhile, in a strange land far away, someone has had A GOOD IDEA.

The ******-based Foundation for Increasing Islamic Awareness Among Foreign Communities has announced that it will publish a book about the life of the Prophet Muhammad (peace be upon him) in Danish and distribute it in Denmark and other European countries.

So what's going to happen is, that after boycotting their butter and Lego and so on, and trashing their embassies, and threatening their journalists with beheading, and generally lecturing them like naughty teenagers, we are going to send them a load of Mohammad biographies. Oh, how the simple citizens of Denmark will welcome such generosity! I can see them now, out on the streets, wiping the tears of gratitude from their eyes, as the lorries trundle into their town squares and deliver these little bundles of Islamic piety! How will they be able to contain their joy? It'll be the best thing that happened to them since Hitler came to town!

Why am I being so coy about the place that this GOOD IDEA came from? Well, let me give you a clue. I once described it thus.

Then there are the people from ******. ****** is described in Lonely Planet or the Rough Guide as the "most unfriendly place in Saudi Arabia". And then some. Remember those old movies about creepy New England towns called Spookyburg or Witchville, where some innocent guy wanders in by mistake, it's all knee deep in mist and the silent locals just stare and don't say anything, the guy ends up next morning as a puddle of ectoplasm on the ground? Well ******* makes those places look like New Orleans. In Mardi Gras.*

*(I wrote this before Katrina, of course)

(I once went there). Never again. Everyone seemed terminally depressed. Not really my sort of place. If I ever feel the need to be depressed, I can tune into Saudi TV.

Still not sure? Another clue. Where was the case of the Physics Teacher who was charged with Witchcraft?

He invented an instrument that produces a sound before the fall of rain. He put this machine at the school's gate to help students know if the rain was coming in order to avoid getting wet in their way home. this machine produces musical sound; so his fellow opponent teachers accused him of legalizing music, which is banned in the Wahhabi sect of Islam, and when Muhammed's case went to court, the judge accused him of using witchcraft to operate this instrument! 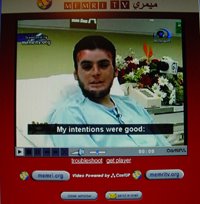 Oh Lord, please don't let me be misunderstood
Yes, it's Ahmad, the Celebrity Jihadi! Failed (obviously!) suicide bomber. Tried to ignite a gas truck in a crowded Iraqi street, to demonstrate the warm, cuddly side of Islam, and just got singed round the edges. Returned to Saudi Arabia to a hero's welcome. Butt of an awful joke. And where does Ahmad come from, as well as hundreds of other wannabe body parts? Why, Qaseem of course, 200 miles north of Riyadh. As you approach, it doesn't of course have a "Welcome" sign, just this:
Approaching Qaseem
Population *******
Twinned with Mogadishu
Terrorism Capital of the Arabian Peninsula
Visit the "Jihadi Hall of Fame"
The reason that the population is not painted in, is that in fact it's one of those LED counters, every few hours the number decreases by one because another son has committed the sin of detonation.
Money for the books is being raised by an appeal. As the appeal says "“Support your Prophet even with a single riyal like he supported you and will support you on the Day of Judgment.” People of Qaseem, let me offer you some pieces of advice:
1. Save your money, spend it on your childrens' education. Why not send them on an exchange visit? Although I have very little insight into what interests Danes, I can assure you that it will not be a book, obviously without pictures, where some sleep-inducing sermon about Mohammad has been translated into clumsy Danish. Even though it's free, it will bomb (pardon the expression) worse than the Ford Edsel.
2. If you insist on publishing it, for Heaven's sake don't mention nine-year-old Aisha. The Danes may not be offended by cartoons, but they are a bit sensitive about old men having sex with under-age girls. They're funny like that.
3. Why not make it dual-purpose, so it's useful in some way? If it were 10 cm squared, it could double up as a coaster, the Danes could put their coffee mugs or glasses of Carlsberg on it, and it wouldn't be a complete waste. Alternately, print it on absorbent paper with perforations, that way it'll be handy for all those little spills in the kitchen.
4. I realize that all these suggestions will be completely Haram, but the Danes might be far more interested in a biopic movie, better still a musical. Is Charlton Heston still working? Also, this is the home of Legoland, how about a Lego depiction of scenes from the Prophet's life?
OK, I know, I'm getting silly, let's change the subject.
"NahnCee" sent me some new emoticons, and asked me if they were blasphemous. To look at them, of course, you need to tilt your head slightly, or rotate them in your "mind's eye". If you come from Qaseem, you may want to follow these simple instructions:
1. Rotate your screen 90 degrees to the right.
2. Don't forget to take that coffee cup off first. Oops, too late, should have made that instruction 1.
3. Read the emoticons. What do they say? Try not to drool on the keyboard.
4. Rotate the screen 90 degrees to the left.
5. If your mouse has turned into a crab, you missed instruction 4.
Here they are:
Muhammad (((:~{>
Muhammad playing Little Orphan Annie (((8~{>
Muhammad as a pirate (((P~{>
Muhammad on a bad turban day ))):~{>
Muhammad with sand in his eye(((;~{>
Muhammad wearing sunglasses (((B~{>
Muhammad giving the raspberry. (((:~{P>
Giving Muhammad the raspberry. ;-P
So, are they blasphemous? I haven't a clue, in Quran class, I was the one who used to skip to the back to see if it had a happy ending. So I asked the Imam Here was his answer:
In the name of Allah, the Beneficent, the Merciful
Dear Brother,Asalaamu 'Alaikum wa Rahmatu Llahi wa Barakatuhu -
I pray that this message reaches you in increasing iman and wellbeing.

If these so-called "emoticons" remain just a collection of symbols, then that is all they are; they are devoid of meaning and significance.
On the other hand if, in the same way that
:-) turns into

it turns into a likeness of the Prophet (PBUH), then it would indeed be a grievous sin to type them or indeed to look at them, and you would be condemned to the eternal tortures of Hell.
But first, we would come and burn your house down.
I pray that Allah Most High grants for you the path of success in this and every matter.
And Allah Knows Best.
So there's your answer, "NahnCee".
No naughty emoticons.