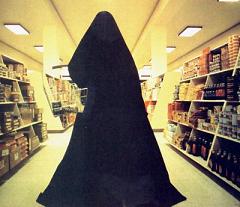 A Saudi female reporter for the "Arab News" tells us this story of a recent shopping trip.

I was on my way to get an ice cream when I happened to pass a cassette shop and decided to go in. At the time my daughter had developed an obsession with a particular song that was being played repeatedly on the music channel and I resolved to buy it for her.

Ice cream can itself be a serious temptation, as we know. But this lady is living even more on the edge.

When I entered the shop, the reaction that I generated from my fellow customers was one that could easily be reserved for an alien landing from another planet. I caught people staring at me in disbelief, glancing at each other nervously, but as this was Saudi Arabia I didn’t find it out of the ordinary. What was surprising was that the packed shop soon became empty as one by one the men all left. Considering that the sight of a woman normally has an effect similar to that of an electromagnet on the male species I began to feel a little perturbed by this sudden desertion.

Little does she realize that cellphone calls are already being made by one or more of these ex-customers.

The walls were lined with cassettes and I crouched down to see if I could spot the singer I was looking for. It was then that I saw a pair of feet standing next to me and looked up relieved to see the cashier who, in lieu of any other customers, had ostensibly come to help in my selection of music.

“Thank you,” I began in Arabic. “I am looking for Elissa,” I declared soliciting his expertise.


His reply was rather odd. “No! Haya!” he said sounding agitated.

I was stunned by the same ridiculous response. “No! Haya!”

Evidently he was either being paid a commission to plug tapes by Haya, whoever she was, or more likely, I was not articulating well enough.

"Haya" is indeed a girls' name, but it also means "modesty". The shop manager, probably an Indian with a limited grasp of Arabic, is no doubt trying to tell her that she is behaving immodestly.

“Look,” I said exasperated, in a tone reserved for the mentally challenged. “Not Haya. I want E-l-i-ss-a,” I said breaking each syllable up in a moronic voice. “E-l-i-ss-a,” I enunciated slowly.

It was then that the penny dropped.

Too late. The phone calls have already been made.

A vehicle pulled up outside and although I didn’t know for what, I instinctively knew that I was in trouble. I pulled my veil over my face and casually strolled over to the ice cream shop.
As I was about to enter a voice boomed behind me, “I know where you have been!”

My legs turned to jelly.

“You were in that cassette shop, weren’t you?” I stood transfixed holding the door open wondering about the severity of the crime I had inadvertently committed.

“I know what you were doing,” the voice continued to accuse. “You were going to buy a cassette!” Dr. Watson had obviously just returned from his special services training in Scotland Yard, but mercifully left me alone after pronouncing that amazing deduction.

Our reporter is a Saudi, after all, and the Muttawa have better fish to fry, so they let her go. But it does leave her wondering about the logic of it all.

It seems that women are forbidden from entering such establishments. To do so is against the law. However, had I chosen to walk a few blocks down to a shopping mall then I would have had no problem entering a cassette shop. It’s the little stand-alone shops that are forbidden fruit. But why they are considered to be so singularly tempting, I do not know.

I can help her out there. Indeed, so can anybody who has spent any length of time in Saudi Arabia. She's being a bit faux-naive, to make her point. It's quite simple, it's all about aisle width. The "cassette shops" (although we do actually have CD's as well!) in the shopping mall have nice wide aisles, like the ones in the supermarket picture above. Men and women can pass without coming too close to each other. But the little "Mom and Pop" cassette shops, the ones with a sub-continent manager/cashier, and an absentee Saudi owner, are much more cramped. With aisles of one metre or less, you have to squeeze past other shoppers. So it's a no-no for women, even Western women, they usually have signs saying "Men only", and I'm surprised our reporter claims not to be aware of the issue.

(Incidentally, even the supermarkets with wide aisles can be a problem. I once rounded the corner of an aisle to come face to face with a veiled shopper who seemed surprised to see a man there, and pressed herself back against the shelving as I did a wide detour around her. Not that men are rare in supermarkets; it's what passes for entertainment in our part of the world. Anyway, ever since then, I've had Mrs. A "run interference" for me, proceeding ahead of me and selecting the items, as I and the family and the trolley follow dutifully behind. It avoids those sudden surprises at the corner of the "Pastas and Sauces" shelf.)


So what happened to the guy? Well, his shop was closed down. He'll have to go around for a bit, kissing shoulders and getting all sorts of forms signed, before he can re-open. And then he'll have to get a new manager / cashier.

However, the poor guy who had tried to boot me out of the cassette shop had not been so lucky. As I left with my sundae I watched him being dragged out and taken away by the police. I felt terrible. When I sent an emissary to investigate his wretched fate, he returned with the news that the fellow in the adjacent convenience store told him that there was “a lunatic woman who had entered the shop and got the guy arrested” and now the shop had been closed down indefinitely.

So there you go, end of story.

What, you want to know what happened to the Indian? Are you some sort of moist-eyed moist-palmed liberal? Well, it depends. The Muttawa go with him to the police station, shout at him, slap him around a bit. Then the police take over. If he's lucky, they keep him in the cells for two or three days, then let him go. He's out of a job, but he's free. If he's not so lucky, if the police sergeant's piles are playing him up that day, he'll be tried for some offense (open up your copy of the Quran and pick a page and a verse at random) and spend months or even years locked up.

So what happens to his family in India, the one he's been sending a few dollars a month to? Look, they're not our problem. And don't ask what his Embassy will do for him. Remember the quote from a few days ago?

The legendary former Saudi ambassador to Washington Prince Bandar bin Sultan was quoted in the Washington Post a few years back as saying, "If the reputation then builds that the Saudis take care of friends when they leave office, you'd be surprised how much better friends you have who are just coming into office."

Not that we'd offer an ex-Indian-ambassador a job, of course, unless they want to work as a driver or a shop manager! But for third-world ambassadors, there's always the promise of a mosque, or a school, or a library, something to tell the people back home, and show that he's got Wasta. So he won't be making any waves.

After all, it's the way of the world in these parts. As our reporter acknowledges....

....regardless of which side of the law you are on, if you happen to be an Asian expatriate you will probably be found guilty anyway!

So if you are a sub-continental expat in Saudi Arabia, and manage a shop with small aisles, and a Saudi lady wanders in before you can stop her, then your destiny is already written. The biggest mistake we can make in this life, is to be born the wrong nationality.

Tell me about it.