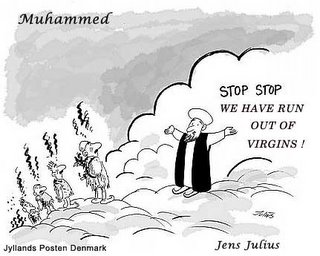 The Saudi Arabian Council of Ministers and Shoura Council ("Poodle Parliament") discusses matters of great import. Obviously the Makkah Hajj Tragedy. But not yet, there's something even more important on the agenda. Cartoons. Yes, cartoons are a very important State matter.

Saudi Arabia yesterday denounced European newspapers that published cartoons denigrating the Prophet Muhammad (peace be upon him) and said such spiteful actions would spread hatred and animosity among people of different faiths.

“The Council of Ministers expressed the Kingdom’s condemnation of what is published by certain European newspapers defiling the Prophet Muhammad (pbuh),” the Saudi Press Agency said. The Cabinet was referring to the caricatures published by some Danish and Norwegian dailies.

Yes. We know. You just told us.

The Cabinet meeting, chaired by the Regent Prince Sultan at Yamamah Palace in Riyadh, expressed anguish and surprise at the inadequate reaction from governments and people in those countries against such vilifications, despite their economic, political and cultural relations with the Islamic world.

I know. But perhaps they have other priorites. Diseased chickens. Russia cutting off gas supplies. Iran being run by a raving lunatic.

In a similar statement, the Shoura Council also condemned the attacks of Danish and Norwegian newspapers on the Prophet and said such publications would unleash communal hatred.

Maybe so. But the stuff was actually published months ago, and nobody really took any notice, apart from papers looking to fill the odd column.

“The acrimonious cartoons on the Prophet hurt the feelings of Muslims across the world and gave false information about a great personality, who was selected by God to become His last messenger,” the statement said.

Hell's teeth, man, they are only cartoons! Get a grip! Chill out!

“Those who publish such cartoons do not know the consequences; they will spread hatred and division and create animosity between communities and religions,” the Shoura said.

Yeah yeah yeah, you already said that. When do we get to talk about the Makkah Hajj tragedy?

The statement rejected publication of such obnoxious cartoons in the name of freedom of expression. “All constitutions and laws in the world call for the respect of Prophets and divine religions,” it added.

No they don't. That's absolute bollocks. Only extreme Muslim countries have laws like that.
Are we on to Makkah yet?

Shoura Council Chairman Dr. Saleh Bin-Humaid urged intellectuals and peace-loving people of the world to stop such vilifications against the Prophet of Islam and punish its perpetrators.

Punish? How? Smack their bottoms? Send them to bed early? Come on guys, is this all you can talk about?

The Shoura urged the Danish and Norwegian parliaments to stand against the anti-Islam campaigns in their countries.

What campaigns? Guys, you are losing touch with reality! Come back to Earth!

The 57-member Organization of the Islamic Conference, the European Commission and many international Islamic organizations have condemned the printing of the provocative cartoons.

The European Commission? Really? (Though sadly, that wouldn't be a complete surprise to many of the ordinary citizens of Europe)
But when do we get to talk about Makkah?

The Cabinet meeting expressed hope that the current four-nation Asian tour of Custodian of the Two Holy Mosques King Abdullah would help strengthen relations with these countries.

Maybe it will, maybe it won't. But at least some other country has to feed the Royal Family for a while. All 260 of them.
Makkah?

The Cabinet meeting, which is first after Haj, commended the various government and private organizations for their efforts in the successful organization of the annual event. It expressed deep sorrow over the deaths of several pilgrims in two accidents: a stampede in Mina and a building collapse in Makkah.

Excuse me. I just had to go out and vomit. I'll be myself in a minute.

There were only supposed to be 2.5 million there, but another 1.5 million managed to slip in when no-one was looking; a total of 4 million in an area the size of London's West End or New York's Midtown. The security forces themselves admitted that they were helpless and reduced to being onlookers. Squatters were allowed to wander around with bulky luggage in tow, accidents waiting to happen, and a stampede took place yet again in the location where the stampedes always take place, killing 360. Meanwhile a hotel collapsed, killing 60, and the ministries are still arguing over who should have inspected the building. And that is a Success? God spare us from a failure!

420 died. That's what we call "Several". 420 human beings. "Several". Mostly foreigners, from Africa, the Indian sub-continent, places like that, but only a few Saudis. Is it because they were mostly "darkies", that "Hundreds" turn into "Several"? The arithmetic of our callous leaders.

Anyway, let's go on and discuss the issues more.

The Cabinet conveyed its condolences to the Kuwaiti government and people on the death of Emir Sheikh Jaber Al-Ahmad Al-Sabah. The regent briefed the Cabinet on the outcome of King Abdullah’s talks with Egyptian President Hosni Mubarak, Syrian President Bashar Assad and US Vice President Dick Cheney.

No, that was it. Move onto the next item. No more Makkah Hajj discussion. Scratch 420 dead pilgrims. Sad for them and their families, but they're history. What's done is done. Draw a line in the sand. Move on.

After all, foreign pilgrims are not our priority. Cartoons are far more important. So here's another one for them. 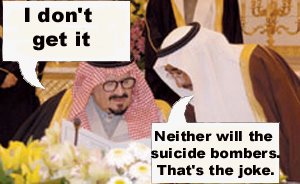