There's a most unholy tantrum being thrown in Saudi Arabia at the moment. The proverbial toys, rattles and dummies are being thrown out of the pram in all directions. And the screaming....you wouldn't think they had lungs that strong.

What's it all about? Well, there are no less than four articles about it in the "Saudi Gazette" and "Arab News", and similar numbers in their Arabic-language equivalents, so it must be something very important. 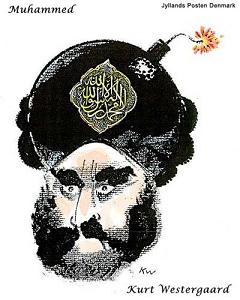 Cartoons? Yes, cartoons. Not the revoltingly anti-semitic ones that we all so love and appreciate. No, these are different. These are those Danish cartoons, again.

It all started, reportedly, because

In September 2005, Kare Bluitgen, a Danish author, was set to publish a book on the Prophet Mohammed, but he could not find any illustrations of the Prophet for his books. Three artists turned down Bluitgen's request to illustrate the Prophet fearing a backlash from Muslims.
At the time, Frants Gubdelach, president of the Danish Writers' Union declared this as a threat to free speech.
Then Jyllands-Posten, the most circulated daily newspaper in Denmark, responded by approaching 40 artists asking them for depictions of Prophet Mohammed.
The newspaper then published 12 cartoons of the Prophet on Sept. 30 last year, alongside an article about the freedom of speech, focusing on how artists were afraid to illustrate the Prophet from fear of extremist attacks.
Since then, reportedly a couple of the artists have gone into hiding.


That was last September. Nobody at the time seemed bothered. There are actually 180,000 Muslims in Denmark, but they appeared not to have noticed or made a fuss either. However, there are always some Muslims on the lookout for opportunities to be offended. They scour the world's press, in its most obscure languages, seeking something to get into a Hissy Fit about. And eventually, four months later, they struck paydirt!

Paydirt indeed, for a Saudi government in late January 2006, anxious to divert attention from its most recent Hajj self-styled "Success", when it demonstrated once more its ability to corral several hundred Muslim pilgrims, mostly from poor nations, to yet another death by stampede. A diversion is needed, and what better diversion than Danish cartoons?

For be in no doubt, when the Saudi newspapers have all these articles on the one day....

Islamophobia .....((WAMY), a Riyadh-based non-governmental organization, has strongly condemned the publication of cartoons......)

Rallying up Support against Scandalous Scandanavians

....don't be under the illusion that two editors coincidentally thought this would be a Good Idea. Saudi newspapers may occasionally show little acts of independence, but when it comes to the big things, like sacking editors, or targetting other countries, the government is still very much in control. And the government ordered a diversion. So for "We are angry at Danish cartoons" read "Don't talk about the Hajj stampede".

Anyway, to explain to Western readers who may be puzzled at all the fuss, what is the basic problem?

Is it cartoons themselves? Well no, all the Saudi papers carry cartoons every day. They are a tool used to make a political point, against a variety of targets. So it's not cartoons.

Let's get the advice of a cleric.

It is as stated in the Qur ân: And if you ask them, they will surely say we were only conversing and playing. Say, Is it Allah and His verses and His messengers that you were mocking? Make no excuse; you have disbelieved... [Surah al-Tawbah: 65-66]

Well that doesn't really apply. If you look at these cartoons, no-one is mocking his messengers; all they are mocking are the extreme latter-day followers, with their bombs, and nonsense about virgins (or raisins), and treatment of women.

It is therefore proven that whoever insults the Prophet (peace be upon him) is an unbeliever and an enemy of Allah. Therefore, it is proven that anyone who blasphemes against Allah, insults an angel, calumniates a prophet or mocks him, or makes fun of the verses of the scripture or the divine legislation is an apostate.

All this says is that the cartoonists are therefore unbelievers or apostates, not true Muslims. But we already know that! They are Danes, therefore presumably Christians or Agnostics or something else. And we can't expect to apply the rules for Muslims to non-Muslims; that would be like Catholics expecting Muslims to follow their rules, and go around crossing themselves and genuflecting. So you are excused if you are still puzzled.

The outrage has been caused by the fact that drawing or depicting a physical image of the Prophet is against Islamic law.

Yes, but Islamic law applies only to Muslims, not non-Muslim Danes. We are not really getting anywhere here. Let's try another scholar.

Ridiculing the Prophet is truly the way of evil-minded people, said Khalid Al-Shaya an Islamic scholar who has been very active in condemning the cartoons.
The Western media, through the Zionists aid, support and their extremist Christian helpers had exerted every possible evil effort to distort the religion of Islam and the life of our beloved Prophet, he said.

I wish I'd not bothered. We've picked a Grade A bigot, who sees a Jooo behind everything. Is there instead anyone sensible out there?

(The WAMY) firmly believes that all prophets (peace be upon them) should be kept away from derogatory and slanderous attacks, because these were the chosen lot of the Almighty to guide humanity on the right path,” said Wohaibi. “Therefore, mocking at the prophets (peace be upon them) is highly degrading and subverts the call for human values and freedom of faith advocated by the United Nations Charter.

Well, that's the World Association of Muslim Youth for you. I used to pass its HQ on King Fahd Highway in Riyadh regularly. I saw lots of elderly men go in, but never any youth. So it's "highly degrading"? To whom? Not to the good souls in Paradise, surely; aren't they beyond all those petty human feelings, up there? Degrading to the people who drew the cartoons? Well, if it is, that would be their problem, not yours, you worry about yourself instead. But now you happen to mention the UN Charter and "freedom of faith", when is "Father Jim" going to be able to build his Christian church in Riyadh, to demonstrate the "freedom of faith" in Saudi Arabia? I've found him an excellent site, by the way. On the King Fahd Highway, where the WAMY building is just now.

Muslims will never accept this kind of humiliation. The article insulted every Muslim in the world.

At last. Someone is being open! It's not about the Prophet (PBUH) at all. It's all about us. Me, me, me! We are insulted. Why? Because we choose to be, it's our right. The cartoonists are mocking the present-day distortions of true Islam by the bigots and zealots and terrorists, and the bigots and zealots and terrorists don't like it. And they are telling the rest of the 1.3 billion that they feel insulted as well, even if they don't.

So what do they want to happen? This is where the toys and rattles and dummies go flying.

We demand a formal apology, said Hlayhel....The Saudi government recalled its ambassador for consultations in light of the Danish government's lack of attention....Saudi Arabia's top cleric has called on Denmark to punish a newspaper that ran cartoons portraying Prophet Mohammad....The two publications should apologize to Muslims around the world....WAMY also sought an unconditional apology from the governments of Denmark and Norway .... and punish the culprits who deliberately provoke over one billion Muslims as part of their hostile propaganda against Islam.

Wow! You get the picture. We expect punishments and apologies, in whatever order. And we ourselves are great believers in apologies, of course. Look how we apologized for all our citizens who flew into the World Trade Centre. And the great expression of regret to the "so-called "Booze Bombers" for their false imprisonment, torture, and extracted "confessions". Not to mention the apologies to the families of fifteen Makkah schoolgirls, killed in a fire by the actions of the Muttawa. And soon there'll be an apology to the families killed in.....

Sorry. I forgot. We're not supposed to talk about the Makkah stampede.
Posted by: alhamedi / 9:17 AM|