.....until he is seven, and I will give you the man". Thus goes the Jesuit saying, but of course it is true of all education. What we sow in childhood, we reap in adulthood. 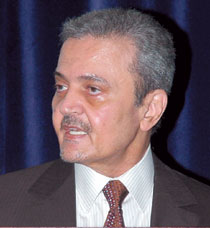 I was reminded of that when reading a speech by our Foreign Minister Prince Saud Al-Faisal recently. It was at a conference in London on "Global Terrorism", sponsored by the Saudi Embassy there. (Don't you just love that - we have been the prime exporters of terrorism around the world, then we sponsor a conference on it. Next week there's one on "Minority Rights" sponsored by the Sudanese Embassy.) One of the interesting statistics he quoted was

Prince Saud pointed out that in 2004, 53 percent of terrorist incidents around the globe occurred outside the Middle East.

The Prince goes on

....the Kingdom recognized that it had to confront directly intolerance and “those who would sow the seeds of hatred and violence in our mosques and schools".

So part of the problem is people in our schools, sowing the seeds of hatred. Who are these people? Evil and manipulative teachers? But before we answer that, here's a little quiz about our schools' teaching on the Jews. Here are six passages. Can you tell which are from our textbooks, and which are from "Mein Kampf" by Adolph Hitler?

1. Though persecution still existed, emanicipation spread throughout Europe in the 1800s. Napoleon invited Jews to leave the Jewish ghettos in Europe and seek refuge in the newly created tolerant political regimes that offered equality under Napoleonic Law . By 1871, with Germany’s emancipation of Jews, every European country except Russia had emancipated its Jews.

2. In order to carry on his existence as a parasite on other peoples, he is forced to deny his inner nature. The more intelligent the individual Jew is, the more he will succeed in this deception.

3. The Jews are wickedness in its very essence. One of the wicked ways of the Jews is that they whisper to one another among themselves....

4. Though Jews became increasingly integrated in Europe, fighting for their home countries in World War I and playing important roles in culture and art during the 1920s and 1930s, racial anti-Semitism remained. It reached its most virulent form in the killing of approximately six million Jews during the Holocaust, almost completely obliterating the two-thousand year history of the Jews in Europe. In 1948, the Jewish state of Israel was founded, creating the first Jewish nation since the Roman destruction of Jerusalem, subsequent wars between Israel and its Arab neighbors....

5. To what an extent the whole existence of this people is based on a continuous lie is shown incomparably by the Protocols of the Wise Men of Zion, so infinitely hated by the Jews.

6. They were discovered in the nineteenth century. The Jews tried to deny them, but there was ample evidence proving their authenticity and that they were issued by the elders of Zion. The Protocols can be summarized in the following points:
1. Upsetting the foundations of the world’s present society and its systems, in order to enable Zionism to have a monopoly of world government....
4. Controlling the media of publication, propaganda and the press, using gold for stirring up disturbances, seducing people by means of lust and spreading wantonness.
The cogent proof of the authenticity of these resolutions, as well as of the hellish Jewish schemes included therein, is the actual carrying out of many of those schemes, intrigues and conspiracies that are found in them. Anyone who reads them ....grasps today to what extent much of what is found there has been realized.

OK, I admit it, that was a bit of a trick question. Those who thought that 1 and 4 are from our textbooks have obviously gone to the sort of school where history is presented in a reasonably objective way, and allows room for disagreement. Such is not the way with our schools. I cheated a little, and took 1 and 4 from Wikipedia.

So that leaves four pieces of nastiness. Which is Nazi nastiness, and which is Saudi school nastiness? That's a tricky one. I removed the historical and stylistic clues, so they are quite hard to tell apart.

So there you go. The villains are not, in this case, the teachers, but instead the government, the Ministry of Education. They teach material to our 14 and 15-year-olds that is inseparable from the rantings of the greatest criminal of the Twentieth Century, a psychotic who applied industrial technology to the attempted elimination of an entire race. Isn't that something for us to be proud of?

Imagine that in the West, you had a school system which sat the children down each day and fed them a tumbler of whisky. They might not like it at first, but they would eventually get used to it. Later on, they would start to look forward to it. By the time they left school, a fair proportion of them would be alcoholics. Perhaps not a problem if they kept it to themselves, but the ones who went out and drove over people or otherwise killed them would start to be a concern. So you would have to start a program of drying-out clinics, to cure them. And they might be successful, although there's no such thing as a cured alcoholic, just one who hasn't had a drink for a length of time. And you might just question the wisdom of spending money and effort creating alcoholics, only to have to spend more money and effort to cure them later.

In Saudi Arabia, we don't feed our children alcohol. Instead, we feed them race hate. It's a progressive thing, building up layer by layer, using the material you see above. Thankfully, many forget it, just like we all forget algebra and bits of history. But there is a proportion for whom it sticks. They are our "alcoholics". And their hatred extends not only to Jews worldwide, but also the countries that are seen to support them - North America, Europe, Australasia. And a proportion of these decide to do something about it, and sign up with the terrorist groups. Eventually they might get caught, and repatriated. And we have our own "drying-out clinics". It's a program where we get people to talk them round, to see the error of their ways, to be rehabilitated. And unlike a drying-out clinic, we keep them in prison in between times, so you can imagine that the "success rate" is a lot higher. It's documented here.

Reeducation of Extremists in Saudi Arabia

In the past six months, the Saudi Interior Ministry released more than 400 security prisoners based on the assessment of the program counselors, after becoming convinced that they had renounced their extremist views. None of the freed prisoners were planners of terror operations who were under interrogation or standing trial.
According to Interior Minister Prince Na'if bin Abd Al-Aziz, "the heads of the program assess that it has had a positive impact on the prisoners' tendencies, and that there is evidence that they admit their error and want to repent."

Are they cured? Given a choice between prison food and 24 X 7 fast food on the outside, we can all take a view on that. And like the alcoholic, is a reformed terrorist just someone who hasn't committed an atrocity for a while?

The Jesuits understood it, and we've happily misused it since. We take the children, teach them hate, and when some of them get addicted, we try to flush it out of their system. Wouldn't it be better not to teach them hate in the first place? I don't think Saudi Arabia has made that decision yet, and nothing that Prince Saud has said suggests that. So we'll keep on spewing them out. And then they'll become your problem as well as ours.
Posted by: alhamedi / 3:33 AM|