The Saudi-government-inspired campaign against Danish Cartoons continues unabated. I am proud to announce that today, the "Arab News" had no less than four articles

whereas the "Saudi Gazette" could only manage

I won't quote from them, they are just recycling the same old pious claptrap and dodgy theology, repeating themselves and each other ad nauseam, on the basis that sooner or later the Danes will cave in and apologize. I've got news for you guys; the Danes don't read Saudi newspapers, any more than 1.3 billion Muslims read Danish newspapers and get offended. But who cares, as long as we don't talk about stampedes where "several" poor Third-World Muslims died.

However, the most important news is that the Muslim "Offense Level" has been raised. 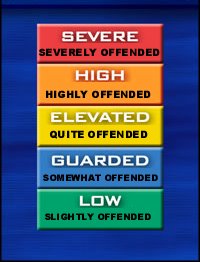 Just to remind you what the various levels mean:

LOW
Meaning - We are slightly miffed, although we are not sure why. We think we are not as popular as we would like to be.
Non-Muslim response - Tread very carefully and do not offend us
Consequence of non-compliance - We will get very cross and stamp our feet

GUARDED
Meaning - We are quite offended, because people are generally picking on us.
Non-Muslim response - Stop making jokes about us
Consequence of non-compliance - We will rant on about "Islamophobia" and "Orientalism", although we don't understand what those words really mean

ELEVATED
Meaning - We are definitely cross, because people keep blaming us for 9/11, Parisian cars getting torched, Saudi women getting stoned
Non-Muslim response - Pretend that these things have nothing to do with Islam or Muslims, tell everyone how we brought algebra to 9th Century Spain
Consequence of non-compliance - We will cause even more mayhem. Did you leave your car out in the street?

HIGH
Meaning - We are extremely offended by a particular individual or country
Non-Muslim response - That individual or country must apologize
Consequence of non-compliance - Individual; Fatwa, assassination, or both. Country; Boycott (unless you export things the Saudi Royal Family are consumers of), and Saudi newspapers write a long string of boring and repetitive articles that you will never read but will drive Saudi readers to distraction.

SEVERE
Meaning - We have had enough of your rudeness and ridicule and have gone completely ballistic
Non-Muslim response - We demand that the Pope and President Bush go down on their knees and apologize personally for every rude thing that everyone has ever said about us over the last 1400 years, and promise that it won't happen again
Consequence of non-compliance - We will cease the export of oil, therefore depriving the numerous Saudi Royal Family of all income, we will cease the import of all cars, tanks, airplanes (military and civil), computers, building technology, infrastructure and general professional expertise, and we will stop visiting Western fleshpots like the South of France, the USA, London..... Honest. We will. We really mean it this time. Just you wait. We really will. You better believe it. We're not kidding. We're telling you. Honest. Don't make us do it.....